--using ultralight gear for a final base weight,including clothing worn, of 8 pounds 2 ounces
-Before and at completion

Complete and detailed directions for making my silnylon backpack, packcover, stuffsacks, fleece hat, and other gear items are given in the book My Journey to Freedom and Ultralight Backpacking . A full discussion of my ultralight methods are included as well.

The landscape, by its patient resting there, teaches me that all good remains with him that waiteth, and that I shall sooner overtake the dawn by remaining here, than by hurrying over the hills of the west. -- Henry David Thoreau

First, the tent. My new tent design,The Tacoma came into my mind at 3 a.m. one morning. I got up to make a paper model, verify the stats with the Pythagoran Theorem, and write a basic set of instructions. The next morning I built it. It weighed just 13 ounces, then I put on the set of doors, and the 16 ounce Tacoma, my AT tent was born.

I made an 8 ounce pack which was the only pack I used the entire trail. It held all my cold weather clothing as well as up to 6 days of food. 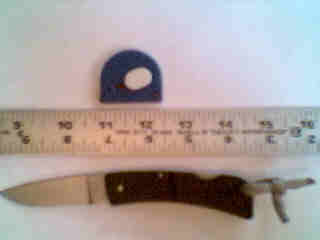 This photo shows the knife I carried on the PCT in 2001, and used another one just like it for the AT. Rainmaker's knife is the larger, black Gerber model which weighs about an ounce. Mine is the spring loaded retractable razor knife, and weighs 5 grams. It lasted over 2,000 miles, and cut an army blanket when I needed to use one for a bag liner from Kennedy Meadows. It is my only knife. Because it is so small, I carry it on a cord, along with my Photon light, and GI-type can opener. My red Photon light made the entire PCT, JMT and AT, without a battery change for a total of more than 5,000 miles between 2000 - 2002. My white Photon is still going strong as well, without a battery change. I won it at the kick off party at Lake Morena, in 2001. It has over 4,700 miles on it.


-Before and at completion

This list, with the weights, changed somewhat over the course of my hike. The heavier list reflects an overnight gear testing hike with minus 5 degrees wind chill factor on February 26 - 27, 2002.

Weights of hiking poles not included because studies show them to save energy, and so offer help on the trail, instead of load. Worn clothing is included in the weight total.

The Tacoma, with stakes and seam sealing....18 ounces--Kept as is.

There are complete and detailed directions for making this pack in the book My Journey to Freedom and Ultralight Backpacking . A similar pack was used sucessfully for the entire Colorado Trail hike in 2003.

The following were packaged at Waynesburro and sent to Glencliff just for the Whites, then discarded at Gorham

camp sandals (ultralight tongs)...4 ounces --Traded for the gram weenie sandals that Rainmaker made for me, which weigh one ounce. These amazing sandals were used in towns, and on the trail from Fontana Dam all the way to Mt. Katahdin.


modified Cats Meow (20 degree bag)....40 ounces
--Bought a 30 degree Marmot 800 fill down bag at Damascus, which I modified to fit my height, forming a soft insulating "nest" of feathers for my feet...24 ounces

trail guide (download from ALDA), pen....4 ounces--Got it down to just 4 sheets of trimmed paper at any given time...half an ounce
…..I had planned on using some guide sheets as self-enveloping journal--Bought envelopes at the post office as needed

the only things I dropped here were the vitamins (which had become bad with the humidity), the soap and sunscreen.


shorts(100% nylon)...5 ounces--Found a lighter pair for 4 ounces
sports shirt...3 ounces
trail runners...24 ounces- the shoes I finished with were 22 ounces for the pair
socks....1 ounce
bandana (which is actually a nylon scarf)...1 ounce
sunglasses...1 ounce

Total weight of pack,( without food and water) for cold weather, including clothing worn was 183.5 ounces, or 11 pounds, 7.5 ounces.

Total finish weight of pack, including clothing worn is 130 ounces, or 8 pounds 2 ounces. This is a valid weight. At Port Clinton, the outfitter weighed my pack which had four days of food in it, as well as 12 ounces of water. He told me it weighed 14 pounds. After Port Clinton, I lightened my cook system, and stopped carrying the soap and sunscreen.

While some may note that I am a small person and therefore my packweight can be less because of smaller items, as a soloist I still require all the gear.

This final base pack weight is about 7% of my body weight. With food and water for 4 days, with a quart of water it is approximately 12%.

Given very cold weather situations, including 4 days of food and a quart of water, the percentage would rise to nearly 16%.

As with all things, each person is unique. Many would require more gear. I only post this as a reference.