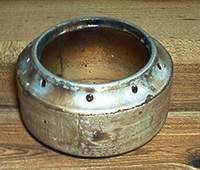 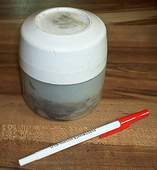 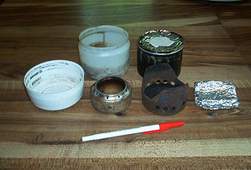 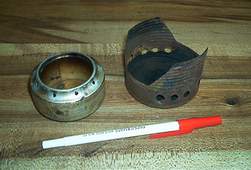 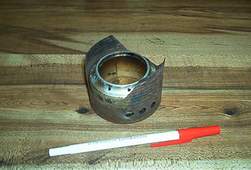 These are photos taken on August 24, 2002 of the soda can stove, cooking pot and lid, cooking pot support, windscreen, and bowl with lid that Brawny (Carol Wellman) used on her thru-hike of the Appalachian Trail. All these items weigh a total of approximately 3 ounces.

My Journey To Freedom and Ultralight Backpacking was written and published in March 2003 describing her Appalachian Trail thru hike and other ultralight adventures.

I made the soda can stove before she began her hike, and she used this stove while hiking the entire distance of the AT, a distance of approximately 2,168 miles. The stove was fired 1 - 3 times per day every day that she was on the trail from March 12 to August 14, 2002. The stove (and the rest of the gear shown) is still in usable condition.

The other items shown were used during the last 594 miles of her hike. When she came home from northern Massachusetts for two weeks in July, she wanted to reduce her pack weight as much as possible before she resumed her hike. As a result, we put this cookset together.

I made the cooking pot support from a standard size can that originally contained black beans. The pot is actually an empty Handy-Fuel Canned Heat container that weighs about a half-ounce when empty. Handy-Fuel Canned Heat is made by The Candle Corporation of Des Plaines, IL. The container is about 3 1/4 inches in diameter and 2 1/4 inches tall. It has a capacity of about 10 ounces. The lid was made from the bottom of a can of catfood. The sharp edges of the lid were ground down, and a length of foil tape was then placed over the edge and folded flat onto the lid. The bowl and lid were made from a container that originally contained powdered drink mix. The containers can be found at food stores and cut down to the desired size. The windscreen was made from aluminum foil. All the items shown nest neatly inside the bowl and lid.

Although the capacity of the cooking pot is only 10 ounces, she was able to use it for cooking by continually adding water. When the first pot of water was hot, she used it for her coffee (made in the plastic powdered drink mix lid), then kept refilling the cooking pot and adding more water to her food (pasta, rice, Ramen, oatmeal, etc.) that had been placed into the bowl.

A variety of fuel was used that included denatured alcohol, rubbing alcohol, fuel-line antifreeze and Hexamine fuel tablets. When the fuel tablets were used, the stove was inverted and the tablet was placed on the bottom of the stove (which was then the top). Alcohol soaked cotton balls (previously used for personal hygiene), small twigs and paper trash were also burned next to the fuel tablet as added fuel.

This is a simple Hobo Cookset, larger than the above ultralight 3 ounce set, but very adaptable. Choose your pot from a variety of cans available, and complete the nesting system with recyclables. Basically free and a great project for all ages.